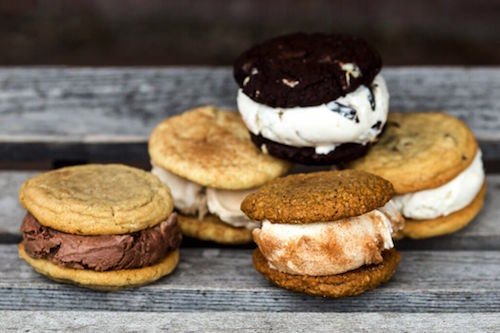 Cool Jack’s, a Sylvan Lake-based company that creates hand-crafted ice cream flavors and sandwiches, is planning to be in up to 100 locations in metro Detroit in the next two years. The purveyor announced today its products are in eight more supermarket locations in the region, along with recently opening a storefront and manufacturing facility in Sylvan Lake.

In addition to being sold in 13 Busch’s stores in metro Detroit, the company recently expanded into other locations, including Nino Salvaggio, Fresh Thyme, Westborn, and Johnny Pomodoros.

Josh Charlip, founder and president of Cool Jack’s, says the company plans to grow by two to four stores per month over the next two years, given that its new Sylvan Lake store and facility, which opened in April, allows them to handle additional capacity.

“You grow as you can provide the product and manufacture it,” he says. “Realistically, within the next two years, we could be in 50 to 100 markets regionally, and then we can grow the franchise side within the next 12 months.”

Charlip says the company, which also has outlets in Southfield and Boca Raton, Fla., will grow the franchise side of the business by testing out new markets with ice cream carts.

The company has plans to cater 400 events this summer, and will add 100 events for next year’s season beginning in April. “Seeing how it takes off in Florida (and metro Detroit), the carts will be our model and we’ll make plans for national expansion from there,” he says.

Cool Jack’s ice cream flavors include chocolate, mint chip, cranberry marshmallow, and cinnamon, while its cookies are available in butter pecan, oatmeal raisin, snickerdoodle, s’mores, and more. Patrons can mix and match the selections to create an ice cream sandwich.

The company was founded in 2011 under the name Eskimo Jacks after Charlip’s dog, Jack. While pursuing national growth, Charlip says the name of the company was changed due to a trademark issue.