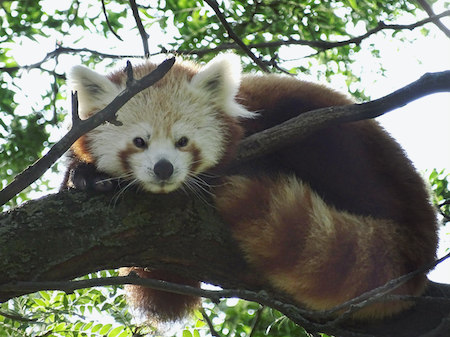 The Holtzmann Wildlife Foundation in Farmington Hills today announced a $500,000 grant to assist the Detroit Zoo in Royal Oak with a 4,000-square foot expansion of the red panda exhibit. The red pandas renovated habitat will feature a more stimulating naturalistic environment combined with educational experiences for the zoo’s 1.5 million annual guests.

The updated exhibit will include natural elements like a flowing stream, larger and more complex arboreal pathways, misting areas to cool the red pandas in the summer, additional land for exploration, and various nesting spaces. The space will also feature a new indoor holding area with heated and cooled areas equipped with nest boxes, branches, and other resources to ensure the red pandas health when they are not in their outdoor habitat.

With an estimated 10,000 red pandas left in the wild, interactive experiences built into the exhibit’s design will increase guests’ knowledge about red pandas and inspire conservation action in their natural habitats. This includes messaging about habitat loss, population decline, and highlight the Holtzmann Wildlife Foundation and DZS’ efforts to preserve red panda populations in Nepal.

The Detroit Zoo is currently home to three red pandas, 1-year-old male Ravi, 2-year-old female Ash, and 12-year-old female Ta-Shi. The DZS has been engaged in a cooperative breeding program through the Association of Zoos and Aquariums. Nine cubs have been born at the Detroit Zoo in the past nine years, all moving on to other accredited zoos to enhance the population’s genetic diversity.

The Holtzman Wildlife Foundation Red Panda Forest was designed by Jones and Jones, architects of the Detroit Zoo’s Polk Penguin Conservation Center, Arctic Ring of Life and National Amphibian Conservation Center. The total project cost is estimated to be more than $700,000.

The foundation was founded in 2015 by Jonathan Holtzman, CEO of City Club Apartments in Farmington Hills, to assist small, grant-funded projects get the backing and exposure they need to improve outcomes for endangered species. The Foundation has a history of private donations to projects on every land continent in the world, as well as the oceans and the air.

City Club Apartments is an owner/developer of urban and suburban-urban rental apartments and penthouses with approximately 10,000 apartments in 30 apartment communities, $2 billion in real estate assets, and more than $500 million currently under development/construction in North America, including a City Club Apartments community now under construction at Washington Blvd. and Clifford Street in downtown Detroit (Fall 2018 planned opening). The company has offices in Detroit, Chicago and Toronto.