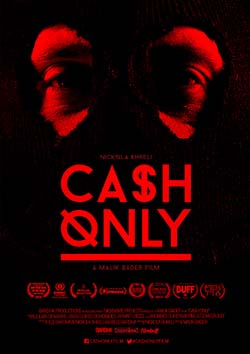 A new crime-thriller filmed in Hamtramck, called Cash Only, is now being shown at the Emagine Novi and the Birmingham 8 movie theater, and is also available for download.

The film was written by Detroit-native Nickola Shreli, who also stars in the film, and was directed by Malik Bader, who directed Street Thief and Crush.

“I was a landlord in Hamtramck,” Shreli says. “That was my education and my hustle, and that stayed with me as I transitioned into filmmaking. Fast-forward 10-11 years later, I was shooting a film directed by John Singleton and he had seen a short film I had made in Detroit. We had a lot of downtime and I started writing these scenes that were loosely inspired by my earlier days in the Detroit area and Hamtramck. That was the backdrop.”

The movie’s main character is Elvis Martini, who owns an apartment building in Detroit that’s about to be foreclosed on by the bank. Most of his tenants are behind on rent, and he’s in debt to bookies. After he finds cash in an evicted tenant’s apartment, he uses the money to pay of some of the debt to his 9-year-old daughter’s private school. However, he then learns who the money belong to and has 24 hours to come up with $25,000 to save his daughter’s life.

He says the nearly 90-minute movie was shot primarily in Hamtramck, along with other locations in Detroit.

“If you’re from Detroit or Hamtramck, you’ll know that it takes place there (but) we didn’t really label it like that,” Shreli says.

The movie is available on iTunes and Amazon and on Netflix in the summer.. To watch the trailer, click here.