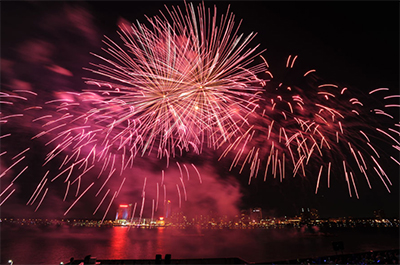 The Ford Fireworks will return for its 58th year on June 27 with the theme, “Go Forward Detroit,” a salute to the progress and bright future the city. The show will include more than 10,000 pyrotechnic effects visible along the Detroit River.

“Now in our 58th year, this event has brought together the city and provided much joy and fond memories over the years,” says Tony Michaels, president and CEO of The Parade Co., the producer of the fireworks show. “We are thrilled to continue that tradition of putting on a breathtaking show for viewers.”

New to this year, Ford Motor Co. will offer free admission to Belle Isle for the first 1,000 vehicles on June 27 by providing the Michigan Department of Natural Resources Recreation Passport. The pass may be used at all participating Michigan State Parks for the remainder of the year.

The fireworks will be choreographed by Patrick Brault, who also designed the pyrotechnic displays at the 2010 Winter Olympics in Vancouver. Michaels says the Ford Fireworks will once again offer the rooftop party, with live music by Fifty Amp Fuse, food by Andiamo, and games.

The Ford Fireworks can be viewed on WDIV-TV (Channel 4) with a live broadcast beginning at 7 p.m. The fireworks will begin around 9:45 p.m. News/Talk 760 WJR will do a special radio simulcast throughout the event.