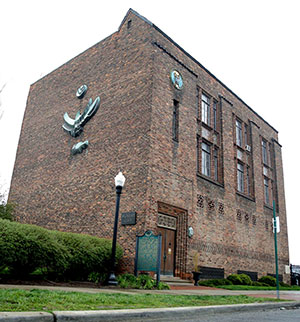 The Scarab Club in Detroit’s Midtown district will unveil a major rebranding campaign in early June, aimed at increasing community awareness of the nearly 110-year-old arts institution, with the message, “We know Detroit by Art.”

“The Egyptian scarab is a symbol of rebirth, and our rebranding campaign is our way to pay homage to our organization’s rich history as well as celebrate the artistic renaissance taking placing in the city of Detroit,” says Duncan Campbell, president of the organization’s board of directors.

Duncan says when he took the position in 2014, the biggest hurtle he encountered was the club’s popularity within the community. “People didn’t know what the Scarab Club was, and they didn’t know where it was,” he says.

After first working to streamline systems internally, Duncan turned his focus to marketing the club. He worked in pro bono collaboration with the Mars Agency, a Southfield-based marketing firm, to create an integrated marketing plan aimed at creating greater awareness of the club.

“The Mars Agency has been absolutely outstanding in its support for the Scarab Club this past year,” Duncan says. “Their creative team has helped us come together from a graphic, media, and marketing perspective that will ultimately allows us to better tell our story.”

He says the rebranding couldn’t come at a better time. “With the resurgence of Detroit, and the increase in Midtown’s population and downtown’s population, we have a lot of people who are in Detroit today that aren’t familiar with the Scarab Club,” Duncan says.

The campaign is designed to attract the public with new outdoor banners, a series of brand launch posters, a reimaged book cover for the Club’s Artists’ Annual publication, exhibition postcards and posters, T-shirts, and more.

The club, which is open to the public, regularly hosts art exhibits, concerts, and events. Duncan also encourages visitors to visit the second story lounge, which is home to 250 visiting artist’s signatures from around the world, including Norman Rockwell and Diego Rivera.

The new marketing campaign will kick off with a VIP reception on June 9. More information about the Scarab Club and its events can be found here.