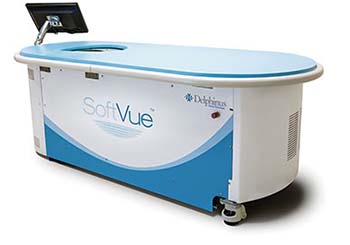 Delphinus Medical Technologies Inc., a developer of breast ultrasound technology, today announced it will relocate its headquarters this week to Novi, in a new space that’s nearly triple the size of its location in Plymouth Township.

“Our growth from 7,500 to 21,000 square feet is a significant expansion that will allow us to increase our lab space, double our headcount, and significantly advance our R&D capability,” says Mark Forchette, president and CEO of Delphinus.

He says the new facility, which will include a technology showroom, will provide a better “environment for our team as we concentrate on our one and only focus: transforming early detection of breast cancer with our breakthrough SoftVue imaging technology.”

After raising $40 million in its Series C round in December, Delphinus has added two new senior-level advisers to its board of directors, as well as a new vice president of quality and regulatory affairs.

Forchette says the company is preparing for the commercialization of its SoftVue imaging technology, which scans the entire volume of the breast tissue. He says the technology offers the potential to assist physicians in finding more cancers while helping to reduce false positive diagnoses.