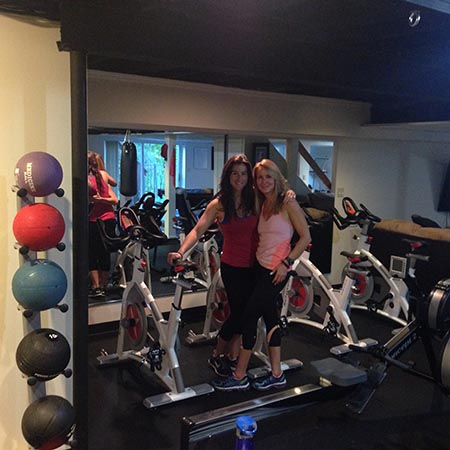 It’s time to tone up, metro Detroit. So say mother-daughter duo Karen and Samantha Kelman, who are launching a new fitness studio concept that offers rowing and spinning classes under one location.

Construction is slated to begin next month on Cycle & Row’s first location, inside Orchard Mall in West Bloomfield, with plans calling to open by Jan. 1 — in time for New Year’s resolutions, Samantha says.

“Living and working in New York City, I really saw the rise of (rowing classes) and we wanted to be the first movers of that here in Michigan,” says Samantha, who recently moved back to the area. “So we have this dual studio concept: it’s one part spinning, one part rowing. We think people will really enjoy the full body workout.”

The 2,000-square-foot studio will come equipped with 20 bikes, plus one instructor bike, as well as space for up to 30 people for rowing classes. The bikes are equipped with performance metrics, which allow people to track how they’re doing during class and compare their statistics from class to class.

People with a competitive edge can opt in and compare their spinning stats with fellow classmates, Samantha says. “It’s optional, but the people that are interested can see how they’re doing when it comes to speed, resistance, and power, (which will be) displayed on big screen TVs in the classroom,” she says.

The rowing machines will offer individual performance tracking measurements, but at this point, are not linked to student profiles — something that is under development and may or may not be ready in time for the studio’s launch, Samantha says.

Karen, a fitness trainer who’s already built a clientele in the area, says the classes are all about efficiency. Following a high-intensity interval-training concept, short intervals of intense cardio are complemented with strength training.

“Samantha is 26, and I’m 51, and there are a lot of different ages and body types in between,” says Karen, noting the facility will have an urban, upscale feel to it. “Both of these (offerings) are non-impact — you can do them for the rest of your life. We’re all about form and safety.

Looking forward, Samantha’s fiancé and Karen’s husband, Jeffrey Friedman and Paul Chaben, respectively, are leading the business’ expansion strategy. The two are currently scouting for a second location, expected to open in 2016.

“When we came up with the concept, the plan wasn’t to be a single studio location,” Samantha says. “We’re thinking really big here. By opening right in the heart of West Bloomfield, (and we will) welcome the neighboring suburbs, which are equally in our target market: Bloomfield Hills, Farmington Hills, Birmingham, etc.”

Plans call for Cycle & Row — which is running tryouts and interviews to fill out a staff of instructors — to be open daily. There will be two to three classes on the weekends and four to six classes on weekdays.

Pricing will be $20 per drop-in and $125 for a monthly-unlimited pass, with a number of available discounted class packages as well.