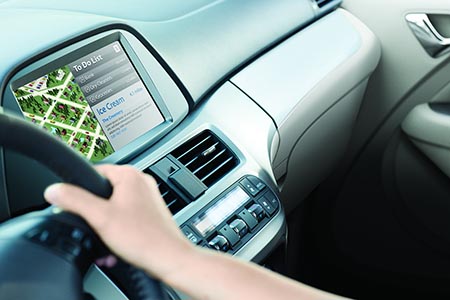 Analysts say changes in requirements for new vehicles, as well as consumer demand for integrated apps, will drive the use of audio infotainment systems from about 14.4 million vehicles today to nearly 25.4 million in 2020. In comparison, only 23 million vehicles will have traditional systems in 2020.

“There are two explanations that explain the rapid growth in display audio units over navigation systems,” says Kevin Hamlin, a senior automotive analyst at IHS. “The first one is the rear-view cameras that will be required in all new vehicles starting in 2018 in the United States. The second explanation is due to OEMs implementing applications (apps) into the vehicle, usually via the driver’s smartphone.”

In-vehicle apps are becoming increasingly popular due to the rise in consumer use of smartphones, Hamlin says. He notes that vehicle infotainment and display audio screens are a way for OEMs to accommodate their consumers by allowing them safe access to apps in their vehicle.

Analysts note that many auto equipment manufacturers are forgoing proprietary navigation systems, such as General Motor’s MyLink, or leaving embedded navigation as an additional option.

Panasonic, Fujitsu-Ten, and Pioneer currently have the largest market share among suppliers of infotainment systems and are likely to see considerable growth over the next six years, say IHS analysts.