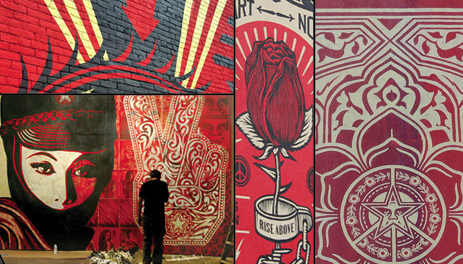 Shepard Fairey, the street artist behind the President Barack Obama “Hope” campaign poster, will be in Detroit to paint his largest mural to date. The mural, which is now being prepped, will be painted on the north (Gratiot Avenue) and east (Farmer Street) walls of One Campus Martius, formerly the Compuware Building.

Bedrock Real Estate Services and Library Street Collective, a gallery in downtown Detroit that specializes in modern and contemporary art, partnered to have Fairey create the 184-foot-by-60-foot mural. Fairey will also paint a mural in the alley known as “The Belt” which runs through The Z parking structure connecting Grand River and Gratiot avenues, between Broadway and Library streets.

Fairey’s murals are part of a larger effort to fill downtown Detroit with street art. Mullen says Bedrock and the Rock Ventures family of companies have worked with about 70 local artists on more than 100 projects in downtown Detroit.

The latter mural will be made up of five large-scale paintings for Public Matter, a rotating outdoor public exhibit in The Belt, which is located behind the gallery. An opening reception in the alley is planned for from 6-10 p.m. May 22, with food trucks and lives music including a performance by the Detroit-based indie-pop band Dale Earnhardt Jr. Jr. Fairey will also serve as a DJ for the event.

During his time in Detroit, Fairey will also meet with students from Detroit Academy of Arts & Sciences, a charter school that is a community partner in The Belt. A piece of Fairey’s artwork will be donated and displayed at the school at the conclusion of his exhibition in Public Matter.

Fairey’s works have been featured in the Smithsonian, New York City’s Museum of Modern Art, and the National Portrait Gallery in Washington, D.C., among others.

New York-based street artists How & Nosm will also paint a large mural on the First National Building in downtown Detroit in May.

Work on the Fairey mural at One Campus Martius is underway and is expected to be completed on May 22.