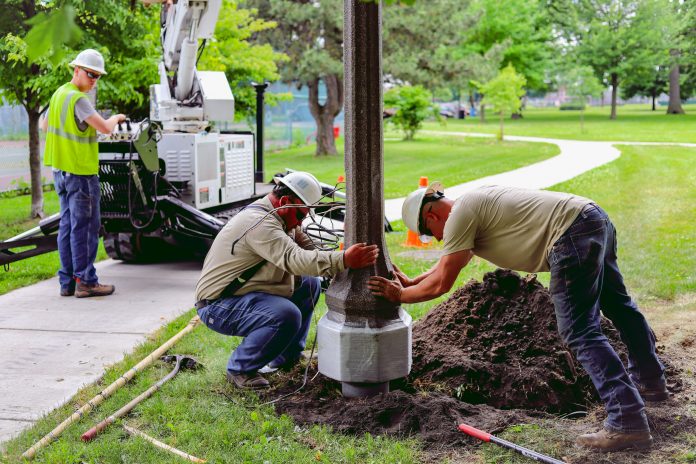 The Clark Park Coalition, a nonprofit group in southwest Detroit, today announced that work has been completed on the installation of 58 historic luminary light poles in the public square, bounded by I-75, Clark Street, West Vernor, and Scotten Street.

In turn, the coalition and several partners are looking to add a zocalo plaza for events, inspired after the main public square in central Mexico City, as well as a splash pad for children and other new park amenities.

“These new lights will transform Clark Park into a beautiful evening destination for residents and visitors, adding to the positive impact of this popular “town square” in a thriving community,” says Anthony Benavides, executive director of the Clark Park Coalition. “Already a popular yearâ€round meeting place for family picnics and gatherings, the new lighting will encourage many evening strolls and nighttime events.”

Since 1991, the Clark Park Coalition, in partnership with the Detroit Recreation Department, has worked together to keep Clark Park a centerpiece of the community, providing four seasons worth of programming for more than 1,200 youth annually.

The Coalition operates the only regulationâ€sized outdoor ice hockey rink in metro Detroit during the winter, and provides free lunches to more than 100 youth daily throughout the summer.

John Pearson Clark, a successful shipbuilder who operated a series of dry docks, shipyards, and owned Detroit Dock Co., all of which were based at Clark Street and the foot of the river, upon his death in 1888 deeded 23 acres of his property for the sole purpose of establishing a park.

The original park (which was expanded by seven acres when public recreational fields were added), included a beaver dam that was to be undisturbed so long as the amphibious animals remained in the area. Upon its opening, Clark Park included a sprouting fountain, playgrounds, benches, and a band shell gazebo. Two artificial lakes were added, and later, the ice rink.