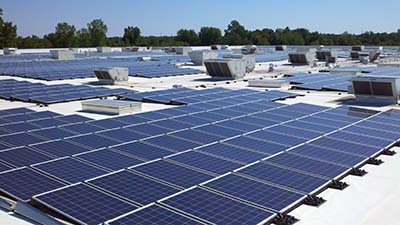 IKEA, an international home furnishings retailer, today announced it expanded the solar array on top of its store in Canton Township to 40,000 square feet. The array produces nearly 294,000 kilowatt-hours more electricity annually for the store —  the equivalent of powering 26 homes.

"We are proud to make this investment, to grow our local sustainable footprint, and to contribute to the IKEA goal of energy independence," Hunsicker says.

Hunsicker says IKEA selected Inovateus Solar for the development, design, and installation of the store's system.

IKEA has the goal of being energy independent by 2020, and has installed more than 700,000 solar panels on buildings across the world and owns about 300 wind turbines, including more than 100 in the U.S.

The IKEA store in Canton Township, which opened in June 2006, has 52 different room settings, three model home interiors, and a 300-seat restaurant. IKEA has more than 370 stores in 47 countries, including 41 in the U.S.