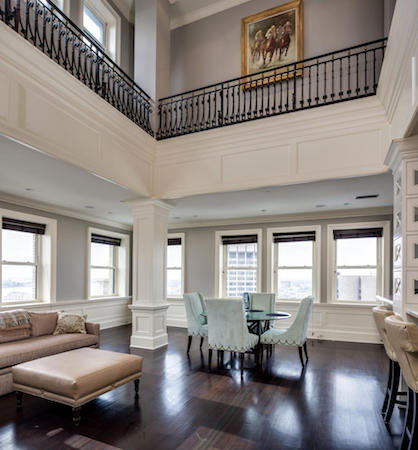 Kyle Swink of Coldwell Banker Weir Manuel today announced the sale of a penthouse condominium on the 29th floor of Detroit’s Westin Book Cadillac. The 2,500-square foot property sold for $1.8 million, now the record for the highest priced condo sale in the city.

The condo is one of three stand-alone units atop the Book Cadillac, and features three bedrooms, two and a half baths, and several amenities, including a 35-foot vaulted ceiling, Brazilian marble, high-end appliances, and more. The bi-level property also features views of the Detroit River, Ambassador Bridge, and downtown Detroit.

“Obviously, this sale set a benchmark, and I think if you asked people three to five years ago if this number was possible, people would look at you like you were crazy,” says Swink. “In reality, I think it shows that people are interested in moving down to the city, and it doesn’t matter if the price point is $300,000 or $1.8 million, the city has so much to offer, and it’s growing work-wise and business-wise.”

He also believes the sale will catalyze more developers to focus on selling condos rather than renting them, as well as boost hi-rise residential development in the city. Swink adds he’s confident the $1.8 million record can be broken in the foreseeable future, and that five of the six other penthouses at the Book Cadillac could be contenders.

“I definitely think the record is going to be broken, it’ll be interesting to see what happens,” he says. “I think the Westin is a little bit of a different circumstance due to the fact that it’s such a wonderful hotel and the residents have so many different amenities. It puts a benchmark on the building itself, that I think will be difficult for other buildings to match if they go into a luxury market.”

Swink has been a broker in the metro Detroit area for more than six years and has produced more than $20 million in sales.