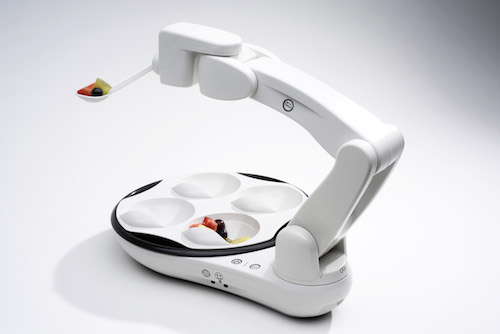 Desin, a technology company founded by a group of investors from Michigan and Ohio, has released its first product, a robotic device that helps individuals with physical disabilities feed themselves.

“(Obi) represents our belief that living with physical challenges can be fulfilling and inspiring,” says Jon Dekar, president and co-founder of Desin. “Technology, and specifically robotics, combined with modern design, should facilitate that.”

The robotic arm, called Obi, works by selecting food items from one of four compartments, and with the touch of a button, delivers it to one of several thousand possible locations where the user can eat from an interchangeable spoon. A caregiver or family member typically loads food into the device.

The robot features a rechargeable battery and holds enough energy to assist with four to six meals per charge. The robotic arm is portable, fits on a dinner placemat, and operates quietly. The device, which has eight patents, is sold on the company’s website.

“Every day, millions of people must be fed by caregivers, and they find the experience to be conspicuous and frustrating,” Dekar says. “Feeding oneself is a basic human need, and there was no good solution available. I became inspired to change that.”

Dekar created the initial prototype of Obi 10 years ago in his college dorm room after seeing, through his aging grandfather and a six-year-old girl with arthrogryposis, what challenges people with disabilities face. He co-founded Desin in 2010 with his father, Tom Dekar, former vice chairman at Detroit-based Deloitte.

“It’s just not an enjoyable experience to have someone feed you, either for the person who’s eating or the person doing the feeding,” says David Hare, a yearlong Obi user living with amyotrophic lateral sclerosis (ALS). “I can’t describe how much more fun meals are now, both for me and my wife, who has long helped me eat. I know people are passionate about their cell phones and laptops, but it’s nothing compared to the excitement I feel about my Obi. Getting it was literally a life-changing experience.”