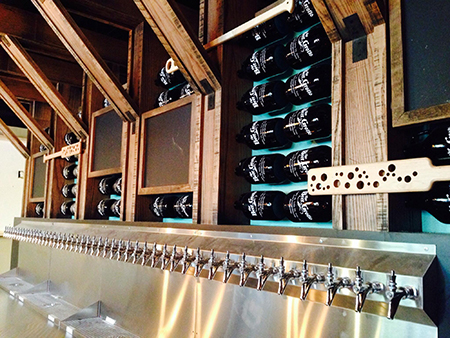 Beer Grotto — a new bar concept which opened its first location in Dexter this summer — has set its sights on Ann Arbor and Lansing, where it plans to open storefronts in November and early spring, respectively.

The chain specializes in growlers and howlers (half-sized growlers that hold 32 ounces) to go. Patrons pay for the glassware, and each time they return for a refill of one of the craft beers on tap, the staff swaps out the used container for one that has been properly cleaned and sanitized.

“We started the concept with the notion that we didn’t want this to be just one store,” says Lisa Manno, director of operations and managing partner of the Beer Grotto. “We want this to be a bar chain. There are other (bar chains), but it’s pretty limited to have one, especially one without a restaurant component to it.”

While the business owners have plans to further expand the concept, for now, they plan to wait and see what happens with the first locations. “We wanted to open these first three in very different locations and collect some data before we decide what our next move is going to be,” Manno says. “We’re looking to see what concepts work best and where, and then we’ll move forward with future openings.”

All locations will have a similar design to the Dexter location, which Kraemer Design Group in Detroit helped create. Manno describes the store as “magical.”

“You walk in and you’re just immediately wowed by what we call the growler wall, which is our tap wall that has rows and rows of our beer growlers just screwed into the wall,” she says. “When you walk around the back (from the retail side to the lounge side), it’s darker and more speakeasy-like. There’s these climbing wooden walls that arch over the seating, so it really envelops you and feels like you’re in a modern-day cave.”

Where the locations will differ will come down to hours and taps available. While the Dexter location has room for 48 taps, the 1,600-square-foot building at South Ashley and Liberty streets in Ann Arbor has room for 36 taps. In turn, the Dexter store closes by 11 p.m. Sunday through Thursday, and by midnight on Friday and Saturday, due to the family-oriented and quiet neighborhood surrounding it, but the Ann Arbor locale is likely to close later to meet the needs of college crowds and football fans, Manno says.

In Lansing, the Beer Grotto will be located downtown, across the street from the Cooley Law School Stadium (home of the Lansing Lugnuts). There, staff will serve up 200 patrons at a time. In comparison, the Dexter location has seating capacity for about 55 people, and the Ann Arbor location will fit 30 patrons indoors and 36 patrons on its outdoor patio.

As of right now, Manno says the Ann Arbor location is slated to open Nov. 12, followed by the Lansing opening in late March, early fall.

For more information about the chain, which also sells boutique wines, visit beergrotto.com.