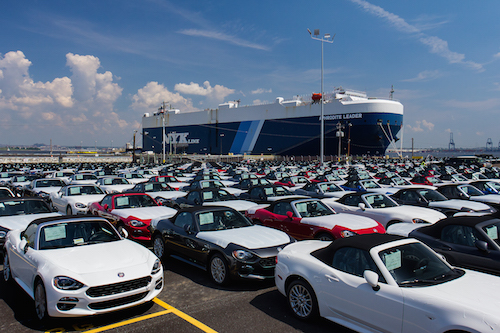 The new 2017 Fiat 124 Roadster has arrived at the Port of Baltimore and the Port of San Diego, and will be available at Fiat studios in North America this month.

The arrival marks the 50th anniversary of the vehicle’s introduction, which was last sold in the United States in 1985.

Paying homage to the original 124 Spider, the new vehicle lineup, which has a starting price of nearly $25,000, includes Classica, Lusso, and Abarth models, with the first 124 units available in a limited-production Prima Edizione Lusso model.

“Just in time for the prime convertible season, customers will now have the opportunity to experience our Italian-designed, fun-to-drive roadster for themselves,” says Bob Broderdorf, director of Fiat Brand North America.

The Fiat 124 Spider has a double-wishbone front suspension and rear multilink suspension with stabilizer bars, and tuned electric-power steering system for handling and fuel efficiency.

Nearly 50 years ago, the original Fiat 124 Spider was introduced at the Turin Auto Show in Italy. Spider production began in 1966, and the vehicle was sold in the United States from 1968 to 1985. Today, nearly 8,000 Fiat 124 Spiders are still registered in the country.