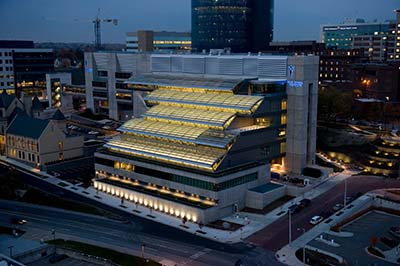 A second phase clinical trial is moving forward as part of Grand Rapids-based Van Andel Research Institute’s initiative to treat cancer. The launch of the next phase, announced today, will focus on treating metastatic colon cancer, the second leading cause of cancer deaths among men and women in the U.S.

Dr. Nilofer Azad and Dr. Nita Ahuja, both at Johns Hopkins University’s cancer center. The first phase of the trial has been underway since 2013, and with the second phase, the investigators will be able to add 40 more patients to the trial and perform additional specimen collection and analysis.

“The first Stand up to Cancer Epigenetics Dream Team made significant progress in treating some lung cancers, finding that epigenetics can potentially ‘prime’ cancer cells, making them more receptive to subsequent chemo and/or immunotherapy,” says Katie Couric, co-founder of Stand up to Cancer, a charitable organization that raises funds for research on cancer therapies. “(The team) will work to build on those results, potentially bringing new hope to patients with colorectal cancer through this trial.”

Azad says the second phase trial will further test a drug called guadecitabine, which corrects errors in a common process that determines whether a gene is switched on or off. He says genes that are inappropriately switched off don’t produce proteins needed for normal function and can contribute to diseases such as cancer. The second initiative began enrolling patients in January.

“(The second phase) allows us to test these drugs in enough patients to really have a strong sense if these drugs work for people with colorectal cancer,” Azad says.

The Stand up to Cancer Epigenetics Dream Team was established in October 2014, bringing together scientists and clinicians from across the U.S. and abroad to move promising therapies into clinical trials. The Van Andel Research Institute works to determine the epigenetic, genetic, molecular, and cellular origins of cancer and Parkinson’s, among other diseases.