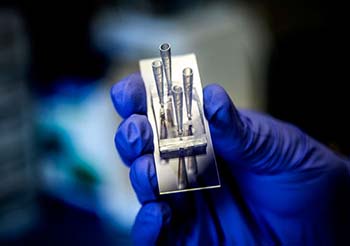 University of Michigan researchers have developed a new technique to mimic the flow of medication through the kidneys, which could lead to more precise and safer dosing of drugs, including some potentially toxic medicines.

The researchers found a way to replicate the environment of a human kidney with a microfluidic chip device, which provides the opportunity to run test after test in a controlled environment.

“When you administer a drug, its concentration goes up quickly and it’s gradually filtered out as it flows through the kidneys,” says Shuichi Takayama, professor of biomedical engineering at U-M. “A kidney on a chip (device) enables us to simulate that filtering process, providing a much more accurate way to study how medications behave in the body.”

In the study, the U-M team tested their approach by comparing two different dosing regimens of gentamicin, an antibiotic that’s commonly used in intensive care units. Takayama says one test mimicked a once-daily drug dose, while the other simulated a slow infusion of the drug. They found the once-daily dose damaged fewer kidney cells inside the device.

“We were able to get results that better relate to human physiology, at least in terms of dosing effects, than what’s currently possible to obtain from common animal tests,” Takayama says. “The goal for the future is to improve these devices to the point where we’re able to see exactly how a medication affects the body from moment to moment, in real time.”

He says the techniques used in the study could be used for a wide variety of other organs and medications. The study, published in Biofabrication, is called Pharmacokinetic profile that reduces nephrotoxicity of gentamicin in a perfused kidney-on-a-chip.​