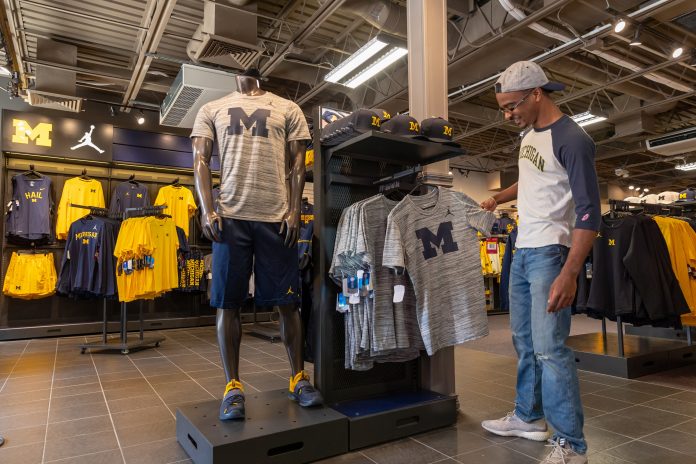 The M Den and Olympia Development of Michigan today announced that the official merchandise retailer for University of Michigan athletic apparel will open its first Detroit location along the new Columbia Street shopping and dining destination next year.

Located next to the Fox Theatre, the block-long Columbia Street destination will bring nearly 40,000 square feet of new shops and restaurants to a European-style, pedestrian-friendly promenade that will feature outdoor dining and festoon lighting.

Located on the street-level of the new nine-story Little Caesars world headquarters campus expansion, the 4,000-square foot space will feature two storefronts; one for The M Den merchandise and another for The Victors Collection by The M Den. The special collection targets alumni and features high-end accessories, golf, and business casual apparel.

Scott Hirth, president and co-owner of The M Den, has been exploring options for a first Detroit location since he and his partners took over the family-owned business in 2013. “It was very important to us that the next round of investment was in the city of Detroit,” he says. “With the resurgence, we wanted The M Den, and by extension, the University of Michigan, to put our stamp on Detroit.”

Hirth adds that the new retail location will bring the University of Michigan’s presence to downtown Detroit, where it originally opened along Bates Street in 1817. The university moved to Ann Arbor in the 1830s.

Headquartered in Ann Arbor, The M Den has products available at six traditional locations in downtown Ann Arbor and throughout southeastern Michigan, including three malls and 13 locations at Michigan Stadium on game days.

Its near 30,000-square-foot flagship on State Street in downtown Ann Arbor features more than 5,000 products for men, women and children. The M Den also serves customers around the world through its website MDen.com. As the official retailer for University of Michigan Athletics, every purchase made through The M Den helps benefit the university’s sports programs.

About 10 percent to 20 percent of the new location’s merchandise will be dedicated to The Victors Collection, which includes licensed apparel from well-known fashion brands like Nike/Jordan Brand, Vineyard Vines, Brooks Brothers, and Tommy Bahama.

The M Den began as a sporting goods shop in Ann Arbor in 1976 before gradually switching its focus to University of Michigan goods, and ultimately becoming the institution’s official retailer in 1992.

“As an athletics retailer, The M Den will be a fitting and welcome addition to The District Detroit, the only destination in the nation where four major sports teams play in the city’s urban core,” says Travis Arbogast, vice president of development at Olympia Development. “The apparel and merchandise shop is among many storefronts planned for Columbia Street that will continue to bring retail diversity to our steadily-growing district.”

Frita Batidos, another Ann Arbor-based business, recently announced it would open its first location in Detroit along Columbia Street next year. The eatery will serve Cuban-inspired burgers, milkshakes, alcoholic beverages, and game-day specials.