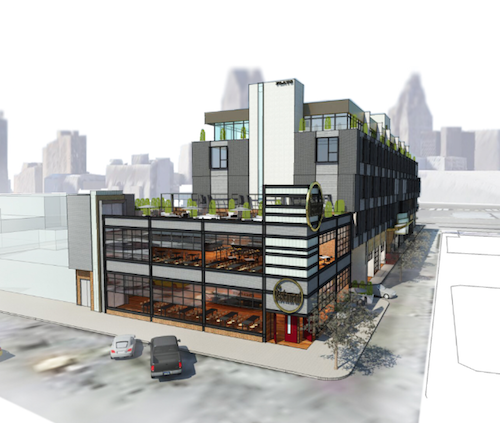 Jonna Luxury Homes in Birmingham is making its first foray into Detroit with the construction of Russell Flats in Eastern Market, an 82-unit apartment community that is slated to open in spring 2018. Construction on the nearly one-acre site will start next spring, and replace a metal, open-air structure.

The project, located at the southwest corner of Russell and Alfred streets (immediately north of Bert’s Warehouse), will offer a mixture of studio, two-bedroom, and three-bedroom residences, along with nine penthouse units on the top floor. Each of the penthouse units, available with two or three bedrooms, will include a small yard.

The western side of the five-story building will offer a second-floor patio where residents will have views of the downtown skyline as well as sunsets. Russell Flats also will include an exercise facility, bike storage, and a doorman. Rental rates will be announced in the coming months.

“What attracted me to the site is that you could live there and have access to fresh food, bike lanes, and all the great things that are happening in the city,” says Joey Jonna, founder and president of Jonna Luxury Homes in Birmingham. “The building will (also) offer (ground-floor) space for a restaurant along Russell Street, and a total of 6,400 square feet of space for artists and small businesses.”

The architect for the project is Hamilton Anderson in downtown Detroit. Jonna says he is looking at other development opportunities in the city. “The revival of Detroit is real, and there is a lot of interest for new residential apartments that are well designed in a desirable location,” he says.

In 2011, Jonna started building luxury homes in Bloomfield Hills and Birmingham. One of his current projects is The Forefront in downtown Birmingham — a 10-unit condominium development along South Old Woodward across from the 555 Building that’s scheduled to open next spring.

Jonna’ father, Frank Jonna, and their family have long been active in the redevelopment of Detroit and the region. Frank Jonna is principal of Jonna Construction Co. in Bloomfield Hills, and has been renovating numerous buildings in Detroit’s Midtown District near TechTown into residential apartments.