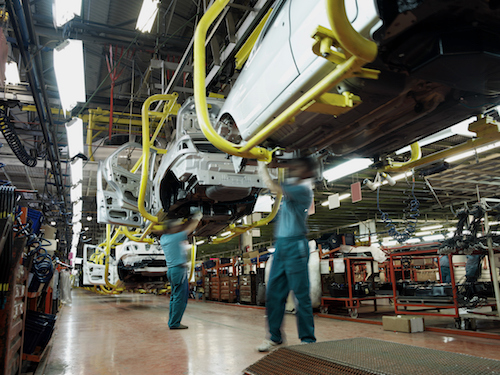 Michigan is the largest producer of light-duty vehicles in the country, as well as Canada, and will continue to be a dominate manufacturing center as its automotive production output will likely remain relatively stable at just over 12 percent of North American production through 2022, says a new report from MICHauto, an economic development initiative of the Detroit Regional Chamber.

According to the report, Michigan is home to 12 light-duty vehicle assembly plants, which collectively employ nearly 35,000 direct employees.

“In addition, it is important to note that since 2009 almost $9 billion has been invested in these plants,” says Glenn Stevens, executive director of MICHauto and vice president of automotive and mobility initiatives for the Detroit Regional Chamber. “Michigan must continue to lead in advanced manufacturing and be a global center for next-generation vehicles. Both are critical to Michigan’s economic future.”

Despite predictions, the report says certain plants in Michigan will still likely experience a change in forecasted production and in the vehicles they produce, citing the discontinuation of the Chrysler 200 platform at FCA US Sterling Heights as an example. However, the plant will likely also see new investment of the Ram Truck.

The report says FCA US Warren plant will likely also see product changes due to a shift in Ram Truck production.

Overall, officials with MICHauto say Michigan’s assembly plants are expected to produce more trucks, SUVs, and large car platforms and a decrease in small car production. Michigan produces 28 different vehicles. In 2016, nearly 40 percent of those vehicles can be categorized as trucks, SUVs, and crossover utility vehicles.

Through a public-private strategy, MICHauto works to champion Michigan as the global epicenter of the automotive industry and provides a platform for collaboration on advocacy, awareness, business attraction, and talent attraction. The organization works closely with Michigan Economic Development Corp., Original Equipment Suppliers Association, Center for Automotive Research, and other state and national organizations.