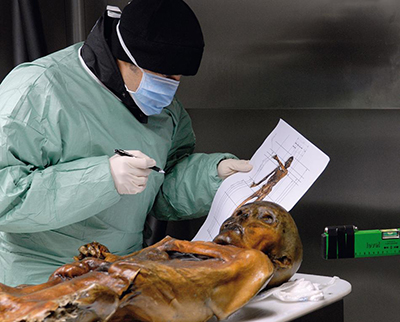 Europe’s oldest known natural mummy who was murdered more than 5,000 years ago, Otzi the Iceman, was recreated with the help of 3-D printing technology from Plymouth Township-based Materialise USA.

Bryan Crutchfield, managing director of Materialise USA, says the company previously worked with the paleo artist Gary Staab to create a replica of King Tut, an Egyptian pharaoh, about five years ago. He says the DNA Learning Center, a science center dedicated to genetics education, approached Staab to create the replica of Otzi and he turned to Materialise.

He says the South Tyrol Museum of Archaeology in Italy, where Otzi the Iceman is displayed, took four CT scans of the mummy.

“We took our Mimics Innovation Suite, which is designed to take CT and MRI image data and turn it into a 3-D model,” Crutchfield says. “This is used in the medical industry for research and engineering for people to design implants … (and) it’s also used in clinical settings to create psychical models so that the surgeons and the clinicians can have a look at complicated geometries of say a soft tissue tumor or heart complexities.”

He says a Materialise engineer took the four individual scans and interpolated them into one solid model. The rendering then went through a process called segmentation. From there, he could 3-D print any structure of the model.

Crutchfield says Materialise was tasked with printing the outside shell of the body, which took two to three days to print and is a plastic-resin material.

The process aired on the Public Broadcasting Corporation’s TV series, Nova, and can be seen here.