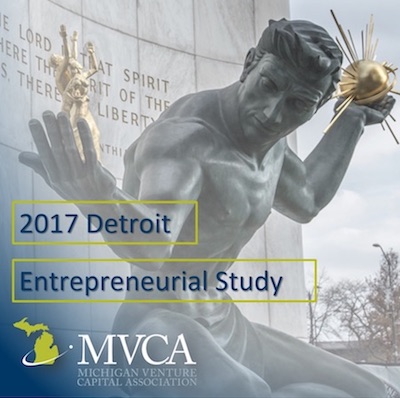 The Michigan Venture Capital Association (MVCA) today announced the findings of its 2017 Detroit Entrepreneurial Study, which analyzes Detroit’s entrepreneurial and investment community. Ann Arbor-based MVCA is a nonprofit trade organization that works to increase the amount of funding and talent available to venture and angel investors to support Michigan’s entrepreneurs.

Data from the study shows rapid growth in Detroit’s entrepreneurial and investment community, with a 50 percent increase in the number of startups in the Detroit area over the last three years. The MVCA study also shows that 25 percent of Michigan’s venture-backed startups are from the Detroit area. More than half of these Detroit startups are still in the early stages, indicating the companies are earning revenue from operations and approaching cash flow positive.

“Detroit’s evolution toward becoming a premier hub for entrepreneurial and investment activity in Michigan has been a long time coming,” says Gabe Karp, partner at Detroit Venture Partners. “The talent and networking opportunities in the city provide new startups a strong base to grow and make an immediate impact on Detroit’s economic resurgence.

“We’ve already seen the positive impact made by the influx of entrepreneurs investing in the future, and it’s only going to accelerate going forward. We expect the startup landscape to continue to grow and define Detroit as a nationally recognized startup destination.”

The increasing demand for startup and follow-on funding to support Detroit’s venture-backed companies exceeds what is currently available, while reflecting a need for improved access to capital.

“The 2017 Detroit Entrepreneurial Study shows the incredible momentum occurring in the city’s entrepreneurial community,” says Maureen Miller Brosnan, executive director of MVCA. “Detroit has long been at the forefront of innovation, and it is becoming the ideal place to build a business. Our goal is to connect entrepreneurs with investors to open the door for greater economic opportunities for all members of the community.”

The study also found there are 35 active venture-backed startups in Detroit. In turn, there are five venture firms that are headquartered in the Detroit area, or have an office here, representing 15 percent of the firms in Michigan.

“The investment and expertise from our Michigan investors was pivotal to our company’s growth as we matured by enabling us to broaden our technology platform and bring our clients new innovations,” says Shawn Geller, CEO of Quikly.