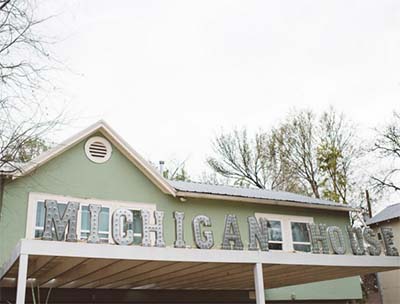 After making its way to the South by Southwest Festival in Texas and Art Prize in Grand Rapids, Michigan House, a pop-up space featuring Michigan-made furniture that serves as an event space, will take residence in Detroit for the 2016 North American International Auto Show.

From Jan. 12-15, Michigan House will be located at the Detroit Trading Co. Building at 601 W. Fort St., offering programming that highlights entrepreneurs, designers, musicians, and chefs, among others.

“We’ll talk about a Detroit that is on the tip of tongues all over the country, and we’ll discuss how coming together as a state through the arts, creativity, and design might just be the key to our future,” says Jennifer Goulet, president and CEO at Creative Many Michigan, a Detroit-based economic development organization, formerly known as ArtServe Michigan, that spearheads the pop-up space.

Goulet says events launch Jan. 12 with a conversation about Detroit food culture moderated by Devita Davison, co-director of FoodLab Detroit. Other events include a pitch competition and an event called Failure:Lab on Jan. 14 where individuals will share personal stumbles in the hopes of de-stigmatizing failure.

Michigan House was in Grand Rapids for Art Prize, an international art competition last fall. Michigan House is next slated to return to Austin in March for the 2016 South by Southwest Festival.