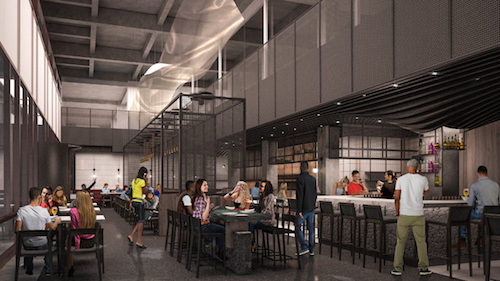 Maru Sushi & Grill, a Michigan-based restaurant chain that serves a variety of sushi and Japanese fusion dishes, will open this fall on the ground level of the former Federal Reserve Building in downtown Detroit.

“(Detroit) is a good market; there’s a lot going on there,” says Thomas Rossana, general manager of the Maru Sushi & Grill in Detroit. “The Federal Reserve Building is a beautiful building.”

He says the restaurant, which is being designed by Rossetti, a Detroit-based architecture firm that has its offices in the building, will have a rustic feel with contemporary elements, and feature a large horseshoe bar, a sushi bar, and a patio.

“Our goal is to have a traditional Japanese backbone, and we extend that into fusion and twists,” he says. “To start, (Detroit) will be much more similar to the other locations, but it will have its own identity.”

Maru’s other locations are in Okemos, Grand Rapids, East Lansing, and Midland.

Rossana says there are plans to open a Maru Sushi & Grill in Kalamazoo this year, and a new restaurant concept next year in Grand Rapids that focuses on eclectic Asian comfort food. The company also plans to open more locations on the east side of the state in the next three to four years.