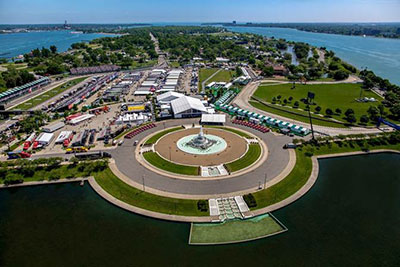 Support from corporate sponsors made the improvements possible, says Bud Denker, chairman of the Chevrolet Detroit Belle Isle Grand Prix. He says the Grand Prix has 74 local and national corporate partners, which is a record number of sponsors for this year’s race.

“The Chevrolet Detroit Belle Isle Grand Prix enjoys tremendous corporate support, starting with Chevrolet, Quicken Loans, and all of our terrific partners,” Denker says, “We are privileged to work with companies that not only realize value in their sponsorship, but they want to support a very positive event for the area and they also see great business-to-business opportunities at the Grand Prix.”

The first Detroit Grand Prix was held in 1982, and originally ran through the streets of downtown Detroit until 2001. After the success of the 2006 Super Bowl in Detroit, Roger Penske and the Downtown Detroit Partnership teamed up to bring the race to Belle Isle in 2007.

In the last year alone the race has led to the complete LED relighting of the MacArthur Bridge, repaving of 1.5 miles of road, and angular parking on the island.

“The $13 million is a start,” Denker says, and he hopes to eventually have the funds to relight the entire island and improve all of the athletic fields. He says race officials work closely with the Belle Isle Conservancy to address needed improvements on the island.

The 2016 Chevrolet Detroit Belle Isle Grand Prix will be held Friday through Sunday. This years’ race will include live music, headlined by the Romantics, along with a number of engagement activities in the Meijer Fan Zone and refreshments from the Coors Light Beer Garden, the Food Court, and local food trucks.