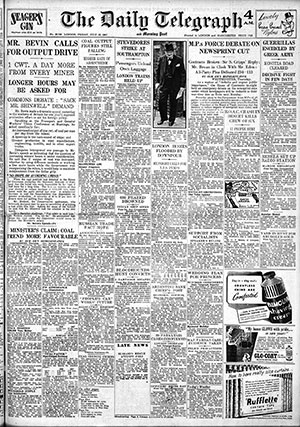 Farmington Hills-based Gale International, a division of Cengage Learning, has expanded its historical newspaper collection with the launch of several new archives. The expansion includes 145 years of the British best-selling newspaper, The Telegraph, a unique collection of Chinese periodicals, and a comprehensive digital collection of national, regional, and local newspapers in Britain between the 18th and 20th centuries.

“These collections speak to the range of partnerships Gale has with different institutions around the world — from the British Library to the National Library of China and beyond — and what allows us to bring such unique, global content direct to researchers,” says Terry Robinson, senior vice president and managing director for Gale International.

Gale’s database will now include The Telegraph Historical Archive, 1855-2000; China from Empire to Republic: Missionary, Sinology, and Literary Periodicals, a collection of English-language periodicals published in or about China from 1817-1949; and British Library Newspapers, Part V, 1746-1950.

The British Library Newspapers, Part V, is the most comprehensive range of national, regional, and local newspapers in Britain between the 18th and 20th centuries ever made available in a digital collection, Robinson says.

The digital archives, part of Gale’s Primary Sources program, give researchers the ability to cross-search with other Gale digital archives and analyze results using graphing and search visualization tools.

All collections are fully indexed and the metadata and data are available for text and data mining, as well as other forms of large-scale digital humanities analysis.