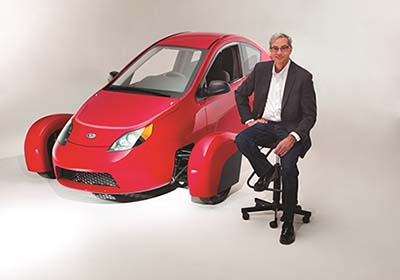 After selecting Livonia-based Roush as its lead engineering supplier in March, Elio Motors Inc., a developer of three-wheeled vehicles, announced today it will establish a pilot operations center in Livonia to assemble its test vehicles.

“Beginning the E-Series assembly is another important milestone in our journey toward production, as these test vehicles will allow our engineering and supplier teams to evaluate and validate our design,” says Paul Elio, CEO of Elio Motors. “Commencement of the build will be another tangible sign of the progress we continue to make every day in our unrelenting quest to get this vehicle to market.”

Elio says the vehicles — used to conduct safety, system-performance, manufacturability, and durability tests — will be built in Livonia by an eight-person team. He says the first E-Series vehicle will be used to calibrate and test the anti-lock braking system supplied by Continental Automotive. As additional E-Series vehicles are completed, they will be used for a variety of aerodynamic, safety, and durability testing.

The pilot operations center is located next to Technosports Creative — the company that built Elio prototypes P2 through P5 — along the Jeffries Freeway in Livonia.

“The E-Series vehicles are an important bridge from the prototype phase to the commercial production phase,” says Gino Raffin, vice president of manufacturing and product launch for Elio Motors. “All of the learning that we gain during the E-Series vehicle build will be transitioned to our production facility in Shreveport for our 100 pre-production vehicle builds that are slated for the end of the year.”

The Phoenix-based automaker says it plans to sell 100 pre-production vehicles to fleet customers by the end of the year, and has extended the bulk of its consumer launch to 2017.