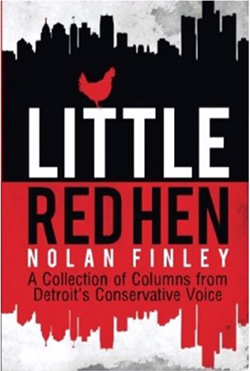 Nolan Finley, a columnist and the editorial page editor for The Detroit News, has released a new book, Little Red Hen, a collection of more than 200 of his columns that reflects the evolution of Detroit from its turbulent times at the turn of the century to today’s new period of enthusiasm and excitement.

Little Red Hen: A Collection of Columns from Detroit’s Conservative Voice (Dunlap Goddard), refers to the popular childhood collection of books, The Little Red Hen, which teaches children the importance of hard work, personal responsibility, and the consequences of laziness.

“This philosophy helped formed my own world view and you can see that in the columns throughout the book,” Finley says. “It’s 16 years worth of work … you see an evolution on some issues, particularly on Detroit.”

Finley says he picked the 200 columns from the nearly 2,000 columns he has written and they also represents the evolution of his opinion throughout the years.

“It was very interesting to follow the city and see how I’ve changed my own views of the city and its future,” Finley says. “It was a turbulent time for the city, not a great deal of hope, then we come into this new period, all of this new enthusiasm, new excitement, that seems to be real, yet there are still some issues … about our efforts at inclusion.”

The book is available through Amazon and Barnes & Noble.