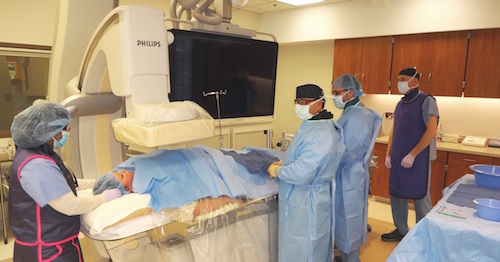 As part of an ongoing $160 million expansion plan, Beaumont Hospital in Farmington Hills has opened its updated Cardiac Catheterization Lab, which was taken out of service in mid-October to install an advanced imaging system.

Dr. Maher Rabah, an interventional cardiologist, will serve as the renovated Cardiac Catheterization Lab’s medical director. With nearly 30 years of experience with the heart programs at the Beaumont hospitals in Troy and Royal Oak, he has performed thousands of angioplasty and stenting procedures.

Officials with the hospital say cardiovascular disease causes 600,000 deaths annually in the United States, and PCI is considered one of the most effective treatments for narrowed or blocked heart arteries or heart attacks.

The expansion of the 51-year-old Beaumont Farmington Hills Hospital is Beaumont Health’s largest capital project since forming its new eight-hospital system in 2014. While Beaumont Health is funding $150 million of the project, it is relying on support from the community for the remaining $10 million.