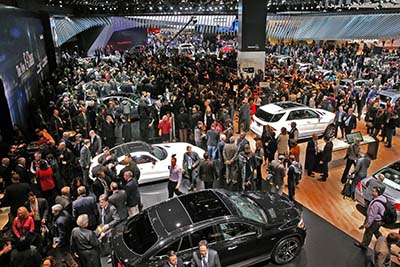 Nearly 816,000 people attended the 2016 North American International Auto Show at Cobo Center in downtown Detroit, up from about 809,000 in 2015. The auto show, which ended Sunday, had an estimated economic impact of $430 million, a $30 million increase when compared year over year.

Paul Sabatini, chairman of the 2016 North American International Show, says the event drew government officials, automotive CEOs, suppliers, more than 5,000 journalists, and a visit from President Barack Obama. Sabatini, who owns Lincoln of Troy, is a member of the Detroit Auto Dealers Association in Troy, the official host of the auto show.

Sabatini says one reason for the increase in attendance was 70 percent of the displays were newly designed, representing a $200 million investment on the part of the exhibiting automakers, suppliers, and partners.

“The auto show is something everyone in this region should be extremely proud of,” Sabatini says. “The $430 million in economic impact is nearly equivalent to having two Super Bowls in Detroit every year.”

He says highlights of the auto show include The Gallery event, which featured $7 million worth of supercars and flagship vehicles and dinner by renowned chef Wolfgang Puck at MGM Grand Detroit; the press preview, offering more than 60 vehicle introductions; and the annual Charity Previewâ€‹, which had more than 13,000 guests who raised $5.2 million for several children’s charities in the region. The public show ran Jan. 16 through Sunday.

“It’s very rewarding to have the strong commitment and partnership from the top automakers to bring their best to Detroit, and journalists respond to these significant brand announcements by generating international news and social buzz felt around the world,” says Rod Alberts, executive director of the Detroit Auto Dealers Association. He adds many attendees were able to see the latest mobility and infotainment offerings for the first time, marking Detroit as a global mobility hub.