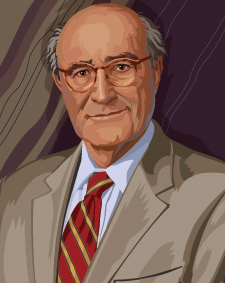 When Wallace Handler graduated from the University of Michigan Law School in 1959, he had dreams of becoming a tax attorney.

But it wasn’t meant to be.

The experience opened his eyes, whet his appetite, and set him on a path that would make him one of the state’s most-renowned bankruptcy lawyers.

“Bankruptcy is a multidisciplined practice that requires knowledge of different areas of the law, and I truly enjoy that,” says Handler, 75, who for years has written about and lectured on bankruptcy.

As a partner with Southfield-based Sullivan, Ward, Asher & Patton, he continues to represent debtors, creditors, creditors committees, and other interested parties in insolvency and bankruptcy proceedings. He also advises individuals and companies on the formation and implementation of liquidation, reorganization, and recovery plans, both in and out of court.

“I’m still near the top of my game,” he says. “I love the law, and I love to work. Work keeps your mind going and gives you a purpose for getting up each morning. I like playing golf, but not every day. I couldn’t do that.”