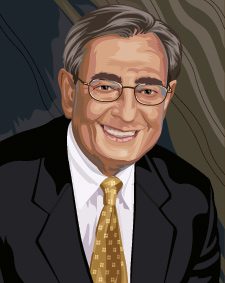 His father wanted him to be a dentist. But Norton Cohen had other ideas. As the first person in his family to go to college, he’d long dreamed of becoming a labor lawyer representing unions.

“My family was always pro-union,” Cohen says. “My grandfather had been a steward for the Amalgamated Clothing Workers union, and even though [my] dad was a small-businessman, he displayed a photo of President Franklin Roosevelt.”

Since graduating from Wayne State University Law School in 1959, Cohen has long been recognized as one of one of the state’s pre-eminent labor attorneys specializing in workers’ compensation and Social Security disability law.

After finishing school, Cohen worked for three months as a law clerk for Michigan Supreme Court Justice Leland Carr until the draft board called. He was soon commissioned a captain in the Army, serving in the Judge Advocate General’s Corps, where he set up court-martial jurisdictions in Germany during the Berlin crisis of 1961. Cohen also handled more than 100 trials.

“In terms of preparing me for trial work, it was an invaluable experience,” says Cohen, who returned to Detroit in 1963 to begin practicing alongside Bruce Miller.

Although Cohen, 74, a partner with Miller Cohen in downtown Detroit, is also passionate about baseball, it’s his love for practicing law that keeps him going.