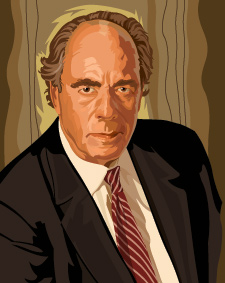 One of the most acclaimed trial lawyers in America, Lawrence Charfoos first came to national attention in the 1970s as a plaintiffs personal-injury attorney, obtaining precedent-setting multimillion-dollar jury verdicts in a slew of medical-malpractice and product-liability lawsuits.

In 1972, he became the first attorney in Michigan to obtain a million-dollar verdict after a young patient suffered brain damage from a botched anesthesia. Charfoos is also remembered for his lawsuits stemming from the infamous 1983 Korean Airlines crash over the Sea of Japan, as well as the 1987 Northwest Airlines crash at Detroit Metropolitan Airport.

But as he’s proved over the years, Charfoos is also adept at making career moves as circumstances and interests change. With the adoption of Michigan’s 1996 Tort Reform Act, which severely limited liability and damages in tort actions, Charfoos reinvented his practice and is now highly regarded for his complex commercial litigation casework.

Charfoos, 74, who recently went into practice with former Wayne County Chief Circuit Judge William Giovan and immigration attorney Robert Birach, doesn’t expect to retire anytime soon. “I feel like many trial lawyers do,” he says. “I want to go out with my boots on.”