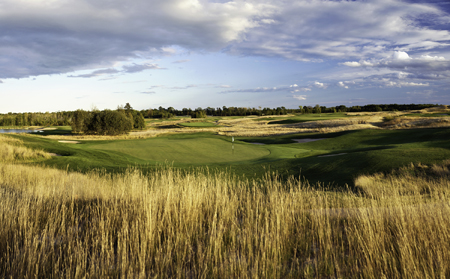 Golf is growing on solid ground above the Bridge.

The Hannahville Indian Community tribal council also approved increasing the total purse by $10,000, to $125,000 annually. That’s not what fans are used to seeing this month as the PGA Tour players fight for a $10 million FedEx Cup prize, but we’re talking feeder tour here — and any bump in prize money is a good sign for the economy and the sport.

“The event puts a spotlight on the beauty and uniqueness of the course which many players regard as the best stop on the circuit,” Tribal Council Chair Ken Mesigaud said in a statement. “Having a professional golf tournament in the region brings excitement to the community and the response from volunteers and sponsors has been overwhelming.”

Sweetgrass has hosted the Island Resort Championship for the past three years, and despite a comparatively remote location, the event boasts year-over-year sellouts in corporate hospitality and pro-am sponsorships and an average of 4,500 spectators annually. Nearly 100 residents show the community side of golf by opening their homes to host golfers during tournament week.

“While hard economic impact dollars are not tracked, the restaurant and retail community overwhelmingly supports the Symetra Tour’s return to Delta County,” said Vickie Micheau, the executive director of the Delta County Chamber of Commerce in Escanaba. “There is a definite energy among businesses and the community at large that has been built from the event. The Tour is well respected, the Island Resort & Casino runs a top-notch event, and the business community continually wants to be involved in its success.

“You can see the direct impact to the business community by their excitement to see it return for another three years — there’s no trouble in sustaining the positive momentum from the area,” Micheau said.

The 2014 Island Resort Championship, a 54-hole stroke play event with a field of 144 professional women golfers, will be held June 27-29. The Sweetgrass Golf Club was designed by Michigan-native Paul Albanese and among other awards was named a Best New Course by Golfweek magazine in 2009.

The Symetra Tour is the official developmental tour of the LPGA with a goal of preparing the world’s best young women professional golfers for a successful career on the LPGA Tour. The Top-10 money winners each year will receive full, equal status for the following season on the LPGA Tour. More than 500 alumnae have moved on to the LPGA the last 33 years, winning a total of 365 LPGA titles, including 39 major championships

Big Ball is the earth, Little Ball is golf ball.

To avoid hitting the Big Ball first keep your eyes on the back of the Little Ball and have your hands and body weight slightly ahead of the ball at contact. This creates a descending blow which compresses the Little Ball causing it to fly higher and further.