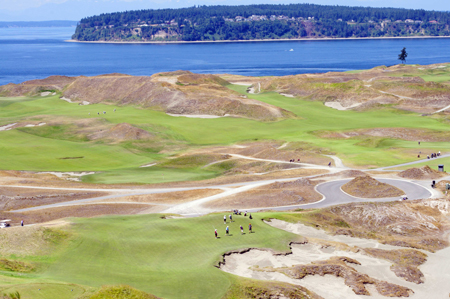 Whoever coined the phrase “photos just don’t do it justice” could have easily been talking about golf in the Pacific Northwest. Every region of the country has its unique features, but for sheer rugged beauty and an enjoyably-mild climate for most months of the year, the state of Washington has award-winning course offerings every golfer should consider.

Not Sleepless in Seattle

It’s easy to get a good night’s rest after walking 18 holes at Chambers Bay, site of the 2010 U.S. Amateur, and upcoming 2015 U.S Open. About 30 miles from the Seattle-Tacoma Airport, Chambers Bay sits on ground of a former gravel mining operation that was beautifully resurrected by designer Robert Trent Jones II, into a much more proper use of precious land butted against the crisp blue waters of Puget Sound.

Similar to the home of golf — St. Andrews — the property belongs to the residents of Pierce County, many who can be found walking the trail that circles the 250-acre golf course layout. Anyone would be hard pressed to find a more unique municipal course anywhere in the country, especially that on first sight takes one’s breath away from the extremely high elevation point of its tastefully-designed, modern restaurant and pro shop overlooking every inch of the golf course from more than 200 feet above.

“People using the golf course are the minority of the resident users of the Chambers Creek Regional Park meadow and playgrounds, and who enjoy community events hosted by the county,” said Chambers Bay general manager Matt Allen, who previously was assistant GM at Bandon Dunes. “We are grateful to operate a golf course amidst that, because the entirety of the property is a public treasure.”

During a recent round together, Allen said the county administration was in talks with the USGA before the course was even built to share their vision for possibly hosting major championships on the unique property, and worked with Jones in development to help fulfill such a dream. Pure links golf – nothing else could describe this incredible piece of property that is breeze-swept off the bay.

It’s not surprising that the USGA would enthusiastically embrace a course (which only opened in 2007) planted with fescue grass in the rough. But that’s not where it ends. Every blade of grass on the course is fescue: tee box, fairway, rough and greens — well, if you can find the “greens.” What stands out the most about Chambers Bay is that not a single green has a collar. The grass is mown — more like shaved — at  the exact same height in the fairway as on the green complexes, the latter which are only identifiable via what is sometimes the tilt of the land and a flag stick, but more prominently by the sprinkler heads that encircle the intended putting zones.

And for being the future site of a U.S. Open, there is no pretentiousness to Chambers Bay (No. 64 in the country according to Golf Digest); no fancy clubhouse, no locker rooms — a real muni course featuring a small starter building with some refreshments, grilled food, and single-stall bathrooms. But bring your most comfortable shoes as walking is the only choice. No power carts; just pull carts for your bag or caddies for hire. With all the elevation changes you’ll get one heck of a workout.

Another 40 minutes away, a course with just as much elevation variety but that could not look more different is the two-year-old Salish Cliffs Golf Club at Little Creek Casino Resort. The tree-lined course in the foothills of the Olympic Range made GolfWeek’s list at No. 11 best casino course nationally in its opening season of 2011.

Gene Bates designed Salish Cliffs, ranked as one of the toughest courses in Washington based on its 75.2 rating/140 Slope from the 7,269 yard tips. It opens with three fun holes — a par 5 downhill, a short par four uphill, then a sharp-drop, long downhill par 3 which if played carefully can get most golfers off to a good scoring start. But ask head pro David Kass and his most telling stretch is 14-16, three very different par 4s based on length, shape and elevation changes — with 14 making a local list for one of the toughest holes in the state.

“I find those three par 4s can make or break your round,” he said. “I can usually look back at the end of the round and see if I did pretty well on those three holes my score will be pretty solid.”

Like Michigan, the greens are bent grass, but surrounded by uniquely cut bunkers that seem more like they were formed by natural erosion than by design. When measured across 18 holes, the elevation drops and rises from each tee to each green totals 600 feet.

The more-mild climate year round is kinder to the Salish Cliffs’ greens, which need almost no turf treatment. That is part of the overall plan of superintendent Bob Pearsall that was also instrumental to the course earning the world’s first accreditation in the Salmon-Safe Golf Course Certification program in Washington, a prideful achievement for the Squaxin Island Tribe, whom Pearsall said are known as “people of the water.”

Indoors at the Little Creek Casino Resort, recent capital improvements include the new Seven Inlets Spa and new Skookum Spirit Cigar and Wine Lounge. One of seven restaurants includes the seafood bar where guests sit on tall bar stools and feast on a wide variety of seafood treats in a sports bar atmosphere. The resort exterior added an RV Park to its property in Shelton, Washington — an area known as the gateway to the Olympic Peninsula.

Like our earliest settlers, taking a trip west someday could be very rewarding.

Creating a proper backswing and follow through become much easier when you begin in the correct position. As you address the ball, place a bit of pressure on the inside of both elbows by pulling them slightly inward. After hitting some balls and gaining comfort with this change, it’s time to move on. While maintaining the inward pressure, rotate your elbows slightly so they are pointing toward the outside of your hips! As you make this change notice how much closer your arms are to each other. As you hit balls with this new address position feel how much easier it is to move the arms and club back together as one unit.