Rain, rain, go away … that childhood rhyme could be the battle cry of every golf course in Michigan this spring.

Fortunately, the May forecast is looking much brighter for course owners and the players who eagerly anticipate frequent visits to Michigan’s finest manicured green grass layouts.

Multiple-course owner, designer and operator Jim Dewling, also a member of the Michigan Golf Hall of Fame, said most course owners plan for 200 days each year as the length of Michigan’s golf season. He currently operates or owns courses like Timber Trace and Whispering Pines in Pinckney, and Highland Hills, north of Lansing.

“Courses budget a certain amount (of play) for April golf, and when it’s gone, it’s gone,” he said.

Many news sources have indicated 2013 has been the wettest spring on record in our state when combining rainfall and snow melt with low temperatures that slow the drying-out process.  Dewling said the record, “is supported by golf numbers so far.  But we’re drying out and we’ve had good play.”

He concurred that low golf-round numbers from spring are very difficult to make up, “but I think we’ll have a good season once we are rolling.”

Paul Worley, head pro at Whispering Willows, one of three municipal courses in Livonia, reminds us that 2011 was a very poor spring season as well, and that this year Whispering Willows’ play through April 30 is slightly ahead of two years ago. “But nothing was going to beat last year,” he said. “It was just an anomaly with some 80 degree days in March.”

Spring 2013’s weather has been so challenging that the Michigan High School Athletic Association’s Executive Council recently held a special meeting to approve expanded schedule flexibility for schools to make up all the canceled spring sport contests so far, from golf to lacrosse to soccer and others.

May 1 was officially its first day of full play, when over 100 people hit the links. The course did host a member tournament on April 27 with 72 players but it was admittedly played in weather most non-tournament golfers would have skipped, and that’s after it was moved back from the scheduled date a week prior.

Dewling summed it up well for all golf course owners in the Great Lakes State, saying “A very slow start, but a very optimistic summer ahead.”

A new feature I am adding to my 2013 blog is golf tips from Bob Krause. Bob has given me some excellent golf advice over the past few years to improve my game by six strokes and now we’re passing along his insights to our DBusiness readers. 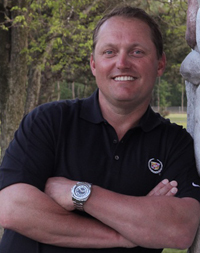 Grab a couple of pennies and head out to the range. Take two pennies and place them on the ground on your target line; making sure they are spaced eight inches apart. Next, place a ball in the middle of the two pennies. As you take your downswing, be sure you miss the penny behind the ball then hit the ball and continue your swing until you hit the second penny. Hitting the second penny will assure that you keep your club lower, longer (through impact) and will demonstrate how the club should feel as you hit through the shot. The more you do this drill the sooner you will be striking the ball more solid with your irons.