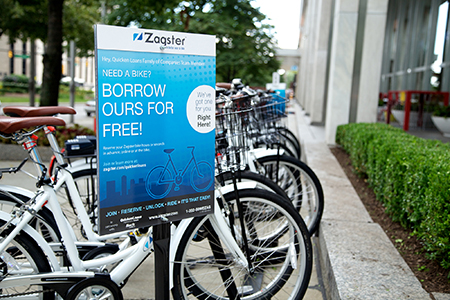 “With the success of public bike sharing programs around the world, more and more employers, real estate developers and universities are looking to offer a more customized, convenient and flexible program for tenants and employees,” Timothy Ericson said, co-founder and CEO of Zagster. “Rock Ventures and Quicken Loans have really stepped up to show the world that the Motor City is ready for a new set of wheels.”

Based in Cambridge, Mass., Zagster has successfully launched bike sharing programs in large cities including Chicago, Boston and New York and is now doing so in Detroit’s burgeoning urban core.

After registering on Zagster’s website, riders simply text ‘start’ plus the bike number (e.g. ‘start 46’) to Zagster. A confirmation message with the access code for the lock box is texted back. This action reserves the bike for the remainder of the day or until the bike is returned.  Riders text “end” to the same number, which releases the bike for the next rider.  Bike reservations last up to 24 hours.

The Breezer Uptown bikes used by Zagster have won numerous awards for their lightweight yet durable frames. They are outfitted with spacious baskets ideal for transporting laptops and computer gear, take-out food or groceries. Riders can park their bikes anywhere they want using the included lock, allowing the ultimate in convenience. When done with their bike, riders simply return the bike back to the Zagster bike rack.

“The launch of Zagster in Detroit is another way we are activating our streets and helping our team members explore Detroit – on two wheels versus four,” Jay Farner said, Quicken Loans’ president and chief marketing officer, adding that the company is sponsoring Zagster memberships for its team members.  “Bike sharing fits in with our place-making initiatives; we hope other downtown companies will follow our lead and consider bringing this perk to their team members.”