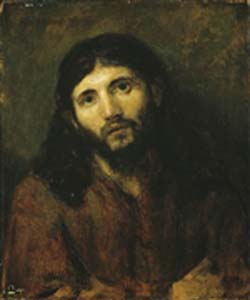 In a rare alliance of artistic missions, the Detroit Institute of Arts partnered with Paris’s Musée du Louvre and the Philadelphia Museum of Art to create a refreshing exhibit called Rembrandt and the Face of Jesus. Many of the works, now on display at the Louvre and coming to Detroit and Philadelphia later this year, have never been seen in the United States.

One of the most historical, well-known artists of the Dutch Golden Age, Rembrandt’s Head of Christ series, painted between 1643 and 1655, is at the center of the exhibit. The exhibition, which features oil paintings, charcoal sketches, and oak-panel studies, will run for 12 weeks at the DIA — November 20, 2011 to February 12, 2012.

The assemblage includes seven paintings, all of which show a realistic presentation of Jesus. Rembrandt’s paintings infer that he was interested in representing Jesus as a young Jewish man, which no one had done in the past. By using a human face to portray Jesus, Rembrandt changed the portrayal of Christian art at that time.

The exhibition will allow viewers to examine the religious and historic significance of his works by displaying Jesus in a revolutionary, new way. It will also allow guests to take an in-depth look into the gesture, staging, and dramatic uses of light used by Rembrandt and his students. “He was the Son of God, but this shows he was also a man,” says Salvador Salort-Pons, curator of European paintings.

Each portrait shows the same young man, but all bears a slightly different expression. Along with the seven bust-length portraits of Jesus, the exhibit will offer more than 50 drawings, paintings, and prints. In addition, the 60-plus exhibition puts the paintings and related works into context by projecting the façade of Rembrandt’s home studio in Amsterdam onto a wall within the exhibit. “This will help to explain how he organized his workshop,” Salort-Pons says.

Famous works of Rembrandt’s that have never been viewed together include “A Weeping Woman” and “Christ and the Woman Taken in Adultery.” Other pieces such as “The Jewish Cemetery” and “The Three Crosses” will be on display, as well.

The exhibit was made possible, in part, by a gift from the Raymond M. and Jane E. Cracchiolo Foundation in St. Clair Shores. By helping to sponsor the exhibit, the goal was to attract the attention of the public, says Raymond Cracchiolo. He added it was important to the couple that school children be included in the experience.

“It will take viewers to another place in time,” says Jennifer Czajkowski, the DIA’s director of learning and interpretation. “The art becomes much more evocative. Art is what it means to be human, and people will feel a personal connection with the material.”