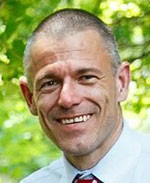 DETROIT – The Wayne State University Division of Development and Alumni Affairs has named Jefferson Porter as the associate vice president for principal gifts.

Porter brings 25 years of experience in higher education and philanthropy to his new role. For nearly 15 years, he served in various fundraising positions at the University of Michigan, including director of life science initiatives, senior director for corporate and foundation relations and associate vice president for development. Porter also was director of corporate relations for the medical center at the University of Chicago. Most recently, he served as an independent fundraising consultant, and his clients included Columbia University in New York City and University of California in San Francisco.

Porter is a graduate of Indiana University, where he received a bachelor’s in journalism and political science.