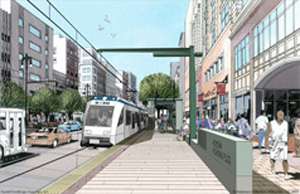 The FTA has completed the environmental clearance for the Woodward Avenue Streetcar Project. With the issuance of the Amended Record of Decision, the project is allowed to move forward to the next phases of design, right of way acquisition and construction. This is the last approval step under the National Environmental Policy Act process.

“On behalf of the entire M-1RAIL team and our community partners I would like to extend our sincere appreciation to the FTA for confirming the streetcar project complies with National Environmental Policy Act and Federal transit laws,” Cullen said. “I would also like to thank the Michigan Department of Transportation, the city of Detroit, all the people and organizations who support this project, along with the passionate members of the Detroit community who provided valuable input. Your continued commitment and contribution is a key first step in an improved transportation system for all of Detroit and our region.”

Now that the process for approval of the Amended Record of Decision has been completed, the M-1 RAIL organization continues to strengthen its team with the hiring of a chief financial officer and by electing eight new members to its board of directors. These announcements come about two weeks after hiring a Chief Administrative Officer and Director of Governmental & Community Affairs.

“We are very encouraged that so many people from our community are eager to be a part of making the Woodward Avenue Streetcar a success,” said Cullen, “and it brings me great pleasure to welcome eight of them to our board of directors.  With their knowledge and leadership at the table, the opportunity for better transit for Detroit and our region in the future is greater.”

The newest additions are:

The M-1 Board of Directors has 14 members, including these additions.

Norman, a senior manager with the Audit and Assurance Department of The Rehmann Group, has more than a decade of experience in finance for a portfolio of clients that has included not-for-profits, governmental entities, and commercial businesses.

As CFO, Norman will lead the project’s Finance Committee; implement near and long-term finance strategies; manage the capital project and operating budgets; and ensure compliance with all funding requirements of federal, state and local funding agencies.   She begins in early May.

“The financial structure of the Woodward Avenue Streetcar Project is very complex given the unique circumstances of this public-private partnership when compared to similar transit projects across the country,” said Norman.  “It’s unprecedented that New Market Tax Credits are being leveraged for a rail system; and that a non-profit organization is spearheading the construction of a $140 million infrastructure project. I am eager to work with the rest of the M-1 team to deliver this great project for Detroit and the region.”

Paul Trulik, who has been serving as interim-CFO, will continue to be involved in the project as Assistant Treasurer for the board of directors.

The FTA Record of Decision applies to the Streetcar Alternative described and evaluated in the Supplemental Environmental Assessment (EA) for the Project, signed February 1, 2013. The EA supplements the Final Environmental Impact Statement for the Woodward Avenue Light Rail Transit (LRT) Project, signed June 1, 2011.  This Amended ROD replaces the ROD issued August 31, 2011 for the LRT Project.

The project is a 3.3-mile, fixed-rail, at-grade streetcar system located entirely within the right-of-way of Woodward Avenue in the city of Detroit.  It would operate in mixed traffic and run from Larned Street in downtown Detroit north to Chandler Street/ Delaware Street, north of Grand Boulevard, in the New Center district.  Twelve stations are proposed along Woodward Avenue, eleven with project implementation and a potential twelfth station in the future.