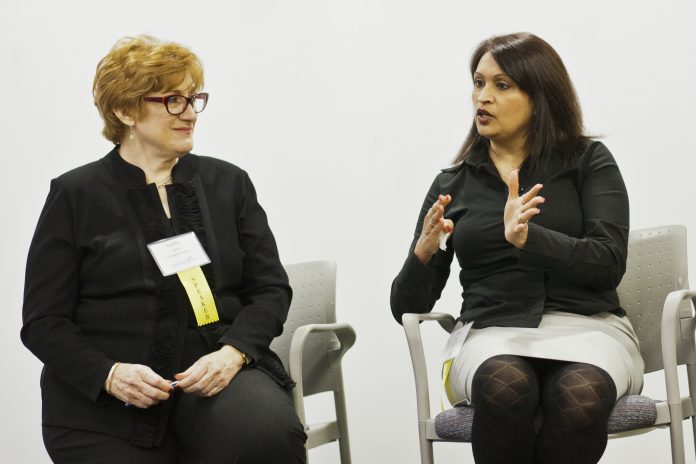 TROY – Networking was among the top advice given to more than 200 women looking to own and grow their own company at a recent business conference held at Walsh College.

“Women need to talk to each other about their business problems more,” says Lola Aré, center director of the Oakland County Small Business and Technology Development Center in Waterford. “Men are always asking for advice. (They) are the people who won’t ask for driving directions, but they’ll ask what direction they should take their business in. And women should do the same.” The center, funded by Oakland County, helps small business owners with fewer than 500 employees start, manage, and grow their enterprises.

According to a 2010 report by the Michigan Women’s Commission, there are more than 248,000 women-owned businesses in Michigan that collectively generate more than $30 billion in annual revenue.

Keynote speaker Pam Turkin, founder and owner of Just Baked, a fast-growing bakery in Livonia, told women to use networking and says she’s donated cupcakes to every group that’s asked. “Networking, especially as women, is the best tool we have,” Turkin says. She credits the success of Just Baked to social networking and word of mouth. The business, which started in 2009, now has nine locations throughout metro Detroit and ships cupcakes to grocery stores across the country.

Emily A. Hay, owner of Hay There Social Media based in Birmingham, emphasized the importance of not only updating websites and social pages regularly — but also making every update meaningful. She advised women to have a Facebook, Twitter, LinkedIn, and a blog for their business to increase outreach.

The session also taught women that content variety helps keep social networks fresh, and that everyone can be a video blogger. “Get yourself a little point-and-shoot and invest in a tripod,” Hay says. “I purchased mine for $15 off Amazon and just like that, I’m ready to record.”

Hay also advised entrepreneurs to never delete negative comments from a social media page, but to express concern with a customer’s problem and offer solutions.

Though the event was primarily for women, there were some male attendees as well, but they were not made to feel unwelcome. “We decided to have this event because women develop entrepreneurial ventures differently,” says Terry Barclay, president and CEO of Inforum based in Detroit with offices in Grand Rapids, Lansing and Kalamazoo. “But there’s no need to exclude the men.”