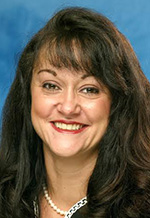 Caroline Grech-Clapper has been appointed to a two-year term as vice president of the Women Officials Network Foundation, she previously held a director position with the foundation