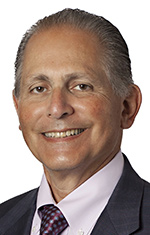 Established in 1963, the Distinguished Alumni Awards program honors and celebrates alumni who bring distinction to their alma mater through professional accomplishments and who have achieved a high level of success in their careers. Alumni are nominated by their peers and selected by the WMU Alumni Association Board of Directors.

Brady is the office managing member of Dykema’s Grand Rapids office. He earned a Bachelor of Science in political science from Western in 1966. In 1987, he was appointed to the WMU Board of Trustees, serving with distinction through one of the University’s greatest periods of growth. He also previously served as a member of the WMU Foundation Board of Directors, holding such positions as board chair and chair of the Committee on Directors.

Earlier this year, Brady received the Marion Hilligan Public Service Award from WMU’s Cooley Law School, which is given annually in recognition of “contributions by a lawyer in public service to area governmental bodies or community organizations, reflecting greater individual responsibility in promoting public health and welfare through law.”

In his practice, Brady focuses on  business and commercial litigation, white collar investigations, criminal law, health care fraud and environmental and energy law. He is former U.S. Attorney for the Western District of Michigan.