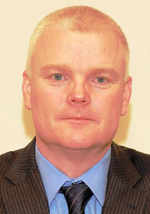 DETROIT — Nicholas McDermott continues his 13-year career with Starwood Hotels & Resort/Westin as the new Westin Book Cadillac Detroit executive chef and director of food and beverages. He has responsibility for all hotel dining, including restaurants, and food service for meetings and banquets.  The announcement was made by Book Cadillac General Manager Debra Schultz. McDermott replaces Jim Barnett who is now the food and beverage director at The Westin Hilton Head Resort Hotel.

Prior to joining Starwood/Westin McDermott worked in several restaurants and hotels in London, Manila, and Calgary, Canada. He attended East Hert’s College, Hert’s, England, and Harlow College. Essex, England.  In 2008, McDermott wrote his cookbook, Reflections from the Kitchen.  He is a member of Chaîne des Rôtisseurs, the oldest and largest food and wine society in the world.