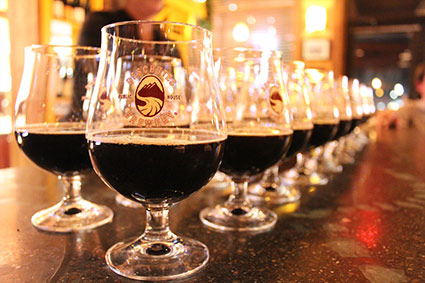 Deschutes Brewery, a popular Oregon-based brewery, is expanding across Michigan into Oakland, Macomb and Wayne counties next month in a partnership with Orion Township-based Powers Distributing Co. and West Side Beer Distributing in Romulus.

The brand initially entered the state last fall in Grand Rapids, East Lansing, and Kalamazoo, and will begin distributing across metro Detroit June 1.

“Our fans in Michigan are passionate about their craft beer and we’re looking forward to them being able to get Deschutes in the Detroit area now,” says Stacy Denbow, business development director for the brewery.

Craft beer fans will have a chance to experience Deschutes on draft at serveral bars and restaurants throughout the two counties. Look out for Deschutes’ Black Butte Porter, the nation’s No. 1 selling craft porter, as well as 2014 World Beer Awards winner, Mirror Pond Pale Ale, Fresh Squeezed IPA with its citra and mosaic hops, and seasonal, Twilight Summer Ale.

Dan Bryant, general manager of Powers Distributing’s craft and specialty division, says there is a lot excitement about Deschutes Brewery coming to the region. “Many of our accounts plan on putting the brand on tap and consumers should ask their favorite craft-centric bar, tavern or restaurant to carry Deschutes.”

Deschutes, a family- and employee-owned brewer since 1988, plans to release six-packs throughout the new distribution region. Michigan marks the fifth state in the brewery’s recent geographic expansion, having recently launched in Ohio, Kentucky, Central and Western Pennsylvania, and Wisconsin last year.