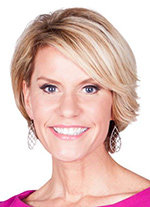 Karen Drew has been named the new anchor of Local 4 News First at 4 and will begin her new duties on Dec. 21. This follows the recent announcement of current anchor Ruth Spencer’s retirement at the end of the year.

Drew, of Troy, is a member of the Local 4 Defenders, the station’s award-winning investigative unit. She reported on government waste, busting a million dollar lottery winner who remained on welfare, exposing a local school official drinking and driving a school-issued vehicle, revealing a con artist scheme to scam people out of their money on adoption deals and uncovering crime trends in local neighborhoods.

Drew started her broadcast career in Dickinson, N.D.  and she also worked at WHOA in Montgomery, Ala; WTVC in Chattanooga, Tenn.; and WJXT-TV in Jacksonville, Fla.