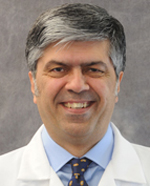 Omar Khan, M.D., Wayne State University School of Medicine professor of Neurology, has been appointed chair of the Department of Neurology. The appointment is effective April 22.

“His devotion to education and the clinical treatment of patients, combined with his passion for collaborative research, make Dr. Khan the ideal person to lead the department into its next chapter,” Valerie M. Parisi, M.D. said. “A widely published and internationally respected neurologist and clinical researcher, Dr. Khan is the ideal leader to maintain the high quality research and sought-after patient care for which the department has become known.”

Khan, a resident of West Bloomfield, has served as interim chair of the department for the last year while the school conducted an extensive national search and interviewed candidates.

“I am honored and humbled by the opportunity to lead a prestigious department nationally known for its excellence in teaching, clinical care and research,” said Khan, the director of the Wayne State University Multiple Sclerosis Center and the Sastry Foundation Advanced Imaging Laboratory. “I am looking forward to working with my colleagues and leading the department.”

Khan, who joined the Department of Neurology in 1998, also serves as neurologist-in-chief for the Detroit Medical Center and associate chief medical officer for the Wayne State University Physician Group.

He received his medical degree in 1987 from the Allama Iqbal Medical College, University of the Punjab in Lahore, Pakistan. Following initial residency training in Pakistan, he performed an internship in Internal Medicine at the Jewish Hospital of Cincinnati from 1990 to 1991. He then completed a Neurology residency at the Medical College of Virginia and dual fellowships in Neuroimmunology and Neuroimaging at the University of Maryland and the Veterans Affairs Medical Center in Baltimore, Md. He served on the University of Maryland Department of Neurology faculty from 1996 to 1998, before joining Wayne State University in 1998.

Since joining WSU, Khan has secured more than $10 million in research funding. He has served as principal investigator in more than 60 studies and is the principal investigator in more than 15 clinical trials, investigator-initiated and National Institute of Neurological Disorders and Stroke-funded studies. He directs the Wayne State University Multiple Sclerosis Center, one of the top five MS centers in the country, with a patient population exceeding 4,500. He is internationally recognized in the field of therapeutic development, genotype-phenotype MR mapping in multiple sclerosis.Khan has established the largest African-American Multiple Sclerosis Clinic in the United States and is the founding member of the African-American Initiative in Multiple Sclerosis, a Detroit community-based endeavor. His MRI Analysis Laboratory, supported by a generous gift from the Sastry Foundation, focuses on developing biomarkers and investigations into mechanisms of tissue injury and repair in neurodegenerative disorders, including Parkinson’s disease, amyotrophic lateral sclerosis, Alzheimer’s disease and multiple sclerosis.