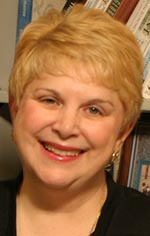 Sheila R. Ronis, chair and professor, Department of Management at Walsh College, was honored with the Outstanding Public Service Award by the Chairman of the Joints Chiefs of Staff, Department of Defense, General Martin E. Dempsey, USA, on June 13 for supporting the mission of the National Defense University, and particularly its International Fellows program.  The medal was presented to her by Major General Gregg F. Martin, the President of the National Defense University in a formal ceremony in Washington, D.C.

NDU is the premier national security institution focused on advanced joint education, leader development and scholarship. Its purpose is to educate, develop, and inspire future leaders of the U.S. Armed Forces, civilian agencies, industry, and partner nations by enhancing their strategic and analytical thinking skills, and creating a network of relationships.

Ronis distinguished herself with exceptionally superior service as the National Defense University Foundation vice chairman and as an International Fellows Field Studies host from May 2003 to May 2013. Ronis has hosted the annual NDU International Fellows Field Studies trip to Detroit, in which General Motors and Ford Motor Company host the groups for a full day of briefs and tours to learn about the U.S. automobile industry. The students, who return to their countries to become senior leaders in their military, diplomatic, or industrial communities, are among the most influential groups in the world. Through her work, Ronis donated hundreds of hours of time in support of the international student programs at NDU. Her enthusiasm for the International Fellows Program resulted in a 10-year legacy of superior field study program activities that has provided exceptional cultural richness and academic depth to those involved “improving international diplomacy,” according to the formal citation that accompanied the medal.

Responding to her award with grace and gratitude, Ronis stated, “I felt I had a duty to support the program, although it feels wonderful to know that people appreciate what I’ve done. This is certainly, the greatest honor of my life.” Ronis also credits Walsh College for its “continued support” of her efforts. Ronis has served as vice chairman of the NDU Foundation board for 10 years and has been involved with the organization for more than 20 years. After nearly 40 years of working in government, industry, academia, and as the CEO of a management consulting firm, she published Timelines into the Future: Strategic Visioning Methods for Government, Industry and Other Organizations in June, 2007. She has published more than 100 papers, edited five books, chaired many conferences and is a frequent speaker at academic, industrial, and government conferences around the world. Ronis is the first member of the NDU Foundation board to receive this award.