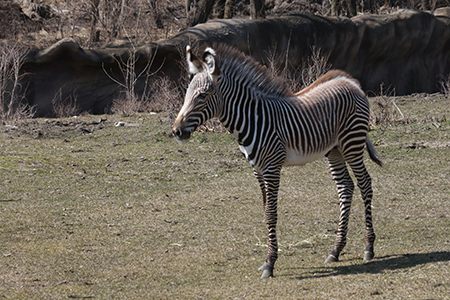 ROYAL OAK — When temperatures reach 50 degrees or warmer, zoo visitors will get their first look at the new zebra foal this year.

The foal, named Enzi, is an endangered male Grevy’s zebra and has been kept indoors during the winter since birth.

“Enzi is doing very well and is full of energy,” says Scott Carter, Detroit Zoological Society chief life sciences officer. “Typical of zebra foals his age, he’s never far from his mom. Elvira is an experienced mother and is doing a great job raising her little one.”

The Grevy’s zebra, named after the former president of the French Republic, is the largest of the three zebra species, with adults weighing between 800 and 1,000 pounds. Zebras are born with brown stripes that turn black as they mature. The striped pattern on each zebra is as unique as a fingerprint, with no two being the same.

The new arrival of Enzi brings the zebra herd to five and the second foal for the parents.