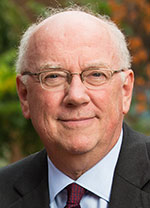 DEARBORN — Daniel E. Little, the longest-serving chancellor in the history of the University of the Michigan-Dearborn, has been approved by the University of Michigan Board of Regents to serve a fourth term until June 2018.

Little will continue to serve as the CEO for the Dearborn campus and as an executive officer of the university. He also is professor of philosophy in the College of Arts, Sciences, and Letters and professor of sociology at U-M in Ann Arbor.

During his current term, UM-Dearborn has experienced record-breaking enrollment, as well as growth in student services and academic programs. Campus enrollment grew to an all-time high of more than 9,100 students in the fall of 2014, marking the third consecutive year of enrollment of more than 9,000 students. And in 2013, Little helped usher in a new era of student life with the opening of The Union at Dearborn, a privately owned complex that is the first housing option specifically designed for UM-Dearborn students in more than 25 years.

Little previously served as vice president for academic affairs and professor of philosophy at Bucknell University. He also was associate dean of the faculty at Colgate University.